Blog
You are here: Home / Blog / News / Trying to find love as a transgender man

From CNN – Devin Gutierrez is a straight man, but he’s never dated a straight woman.

A transgender man, Gutierrez grew up as a woman. In high school, he was a bit of a tomboy and came out as a lesbian. But even then, he knew there was something more he was missing.
“Being in a woman’s body, I felt trapped,” he said. “I would see myself in the mirror and see the feminine features of my body, and I would hate it.”
A year ago, the 30-year-old began taking testosterone, and his life completely changed.
He expected some of the change: Gutierrez knew his his muscles would grow, his voice would drop and his facial hair would come in. But there were surprising changes as well.
“The sex drive itself — it’s crazy,” he said. “I even asked one of my gay friends, ‘What is this feeling? Why am I so excited all the time?’ I can’t get it out of my head, it’s a constant thing. He said ‘Welcome, now you know what guys go through.” 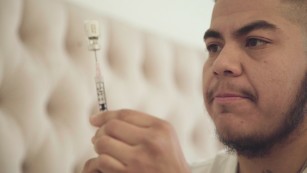 Gutierrez began to date, a struggle for any single person, but especially difficult for those in the transgender community. Until recently, most mainstream dating apps have had only “female” and “male” listed as genders.
While Gutierrez has gotten top surgery and had his breasts removed, he has yet to get bottom surgery. That meant straight women were “looking for something I don’t have.” And if he dated lesbians, he realized, those women would have to confront their own sexuality as well, because they’d be dating a man. 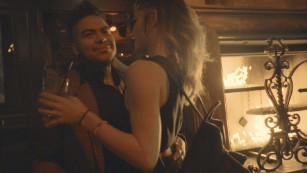 It becomes especially difficult at lesbian clubs, where he prefers to go. “The music’s loud and I don’t have the opportunity to say I’m a trans guy. I don’t get hit on and if I do get hit on I get hit on by gay guys.”
Gutierrez’s experience is certainly not unique. It’s a common misconception that all transgender people get “the surgery.” Just 33% of trans people report undergoing some form of gender-confirming surgery. And 21% of transgender men are not interested in having gender surgery, according to the Human Rights Campaign.
Alex Schmider, a senior strategist for transgender media at GLAAD, explained why those numbers might seem low.
“Some people just choose not to because that’s not an essential part of their gender, nor should it be for anyone,” Schmider said. “Gender reassignment surgery does not define who someone is, just in the same way that certain parts of our bodies don’t define who we are as people.”
Recently, Gutierrez had his first date with Ari Dee, a woman who said she does not define her sexuality. This was Ari’s first time going on a date with a trans person.
“I prefer not to have labels,” said Dee, a 29-year-old makeup artist. “I just kind of go with my heart.”
The two met through a mutual friend before Gutierrez’s transition, and at the time neither knew they were attracted to one another.
But post-transition Gutierrez decided to ask Dee on a date. She said yes. A month after their first date, Gutierrez asked Ari to be his girlfriend. She said yes.
Dating may get a little easier in the future for those in the transgender community. In November, Tinder announced it was adding more genders to its dating app. And at SXSW this year, its founder Sean Rad said the app had since made 250,000 transgender matches.
“We’re not the bad guys,” Gutierrez said about misconceptions some may have about the trans community. “We’re simply humans.”

CNN’s Anne Lagamayo and Janelle Gonzalez contributed to this report.

Kansas City Based Series NEW GIRLS ON THE BLOCK, Premiered on April 11 on Discovery Life Channel

Going From Marginalized to Welcomed in the Workplace

Two Consonants Walk Into a Bar…

Going From Marginalized to Welcomed in the Workplace
Scroll to top