Blog
You are here: Home / Blog / News / Going From Marginalized to Welcomed in the Workplace

When Michaela Mendelsohn, the owner and chief executive of the Pollo West Corporation, arrived at her restaurant company’s holiday party in 2006, it had been a year since she had seen most of her 500 employees. In that time, she had worked from her home in the Conejo Valley of Southern California and was in contact with only a handful of staff members.

A rumor had circulated that she was dying of cancer. But in fact, she was transitioning from male to female, including undergoing facial and body surgeries and changing her style of dress to one she describes as very feminine.

Feeling both nervous and excited, she stood up and introduced herself to her staff. “They had no idea who I was,” Ms. Mendelsohn said, adding that their reaction was largely supportive.

But Ms. Mendelsohn’s experience was atypical. Most transgender people cannot take a hiatus from their workplace while they transition, nor do they have the options of someone who owns the company.

Employment laws protecting transgender people are in place in 19 states and the District of Columbia, along with 200 cities and counties. And the Equal Employment Opportunity Commission interprets Title VII of the Civil Rights Act as prohibiting discrimination on the basis of transgender identity. Federal civilian employees have additional protections. Yet 30 percent of transgender workers nationwide have been fired or denied a promotion, according to the 2015 United States Transgender Survey. Transgender Americans are three times more likely to be unemployed and twice as likely to live in poverty as the general population, according to the survey, which was conducted by the National Center for Transgender Equality.

Ms. Mendelsohn, now 64, saw a potential fix for these problems. She knew that she and others in the restaurant industry were struggling to find reliable workers and that they were overlooking the transgender demographic.

In California, 218,400 adults identify as transgender, and nationwide the figure is 1.4 million, according to a study by the Williams Institute at the U.C.L.A. School of Law. “We can’t afford not to look to this new pool of employment that can really help us,” Ms. Mendelsohn said. 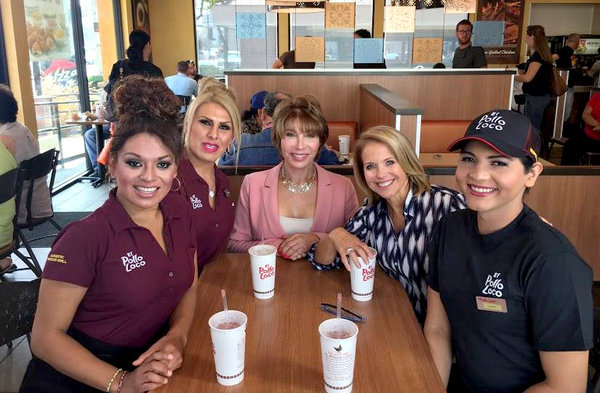 Michaela Mendelsohn, center, the owner of El Pollo Loco restaurants, with Katie Couric, second from right, and three employees. Ms. Mendelsohn, who is transgender, has hired 40 transgender workers in the last five years.

So she began recruiting transgender job candidates for positions in her restaurants. And in 2015, she started TransCanWork, a nonprofit that has teamed up with the California Restaurant Association, among other groups. The program trains employers to become transgender-friendly in their hiring practices and their overall operations. It also connects transgender people with employers; a state grant pays for the first 60 hours of each new employee’s wages.

TransCanWork is the first large-scale program of its kind in the country. It was partly modeled on the work of the Los Angeles L.G.B.T. Center, and it follows on the heels of the Trans Employment Program, a decade-old initiative of the San Francisco L.G.B.T. Center that provides employment services to the Bay Area’s transgender population. The Trans Employment Program holds job fairs, provides computer programming training, stages weekly peer-to-peer networking groups hosted by Microsoft and helps transgender people decide things like what name to use on their job applications and how to come out to their past job references.

“A lot of the marginalization that trans people face is because they can’t get jobs,” said Mara Keisling, executive director of the National Center for Transgender Equality. Until recently, employers “basically just said: ‘No, you’re trans. Get out of here,’” Ms. Keisling said, adding that the tenor of hiring discrimination has shifted in recent years. “Now it’s like, ‘Well, you just weren’t the right fit,’” she said.

The training includes a short video covering subjects like bathroom use, proper use of transgender pronouns and which questions are appropriate to ask. Surgery queries are off limits, for instance.

In the last five years, the Pollo West Corporation has hired 40 transgender workers. Ms. Mendelsohn said that the response from customers has been overwhelmingly positive and that her transgender employees are thriving; about 25 percent have been promoted to management positions.

She plans to extend TransCanWork to the retail, nonprofit, tech and hotel industries. She’s also discussing with the California State Bar and other state agencies the possibility of training major industries on new regulations related to transgender hiring. 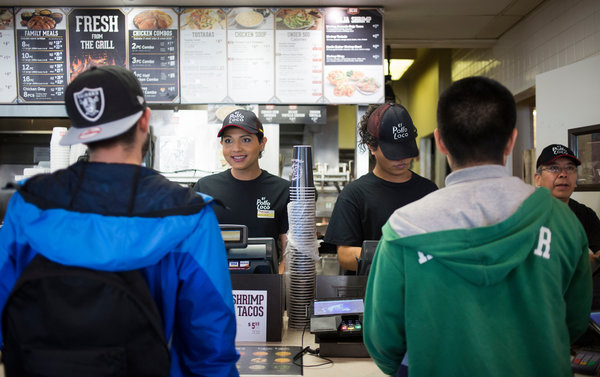 The program comes at a time when the entertainment industry is employing more transgender people — notably on the television shows “Transparent” and “Orange Is the New Black” — and transgender models are beginning to get work through modeling agencies founded and run by transgender entrepreneurs.

Ms. Mendelsohn said she believed that the restaurant industry was also well situated to help introduce the general population to the transgender community, pointing out that California has 70,000 restaurants that employ 1.3 million people.

“For the first time in their lives, customers may be forming some form of a relationship with a transgender person in a restaurant,” she said. “The potential to open hearts and minds is tremendous.”

Marie Angel Hoole and Walker Miner, transgender employees at one of Ms. Mendelsohn’s El Pollo Loco restaurants in Los Angeles who were hired through TransCanWork, said that working for a welcoming business has made a huge difference for them.

Ms. Miner, originally from Palau in the Pacific Ocean, said she had trouble finding work when she first moved to the United States. “As far as employers, it’s hard,” she said. “A boy walks in wearing makeup and they’re like, ‘Thanks, but no thanks.’”

By contrast, her El Pollo Loco bosses are supportive. “It’s just better to work for someone where you don’t have to constantly explain what you are, or say, ‘Please acknowledge my gender identity,’” she said.

Ms. Hoole, who has worked in restaurants for the past 10 years, spent a year applying for restaurant jobs in Los Angeles but was never hired despite her extensive résumé. Finally last summer, she interviewed at one of Ms. Mendelsohn’s restaurants; a month later, she was hired as a cashier and a drive-through attendant.

The process was not daunting, and she considers her new work environment “more inclusive,” she said. “It feels like there’s a sisterhood.”

Trying to find love as a transgender man

Kansas City Based Series NEW GIRLS ON THE BLOCK, Premiered on April 11 on Discovery Life Channel

Black and Veatch supports and celebrates the transgender population

Trying to find love as a transgender man